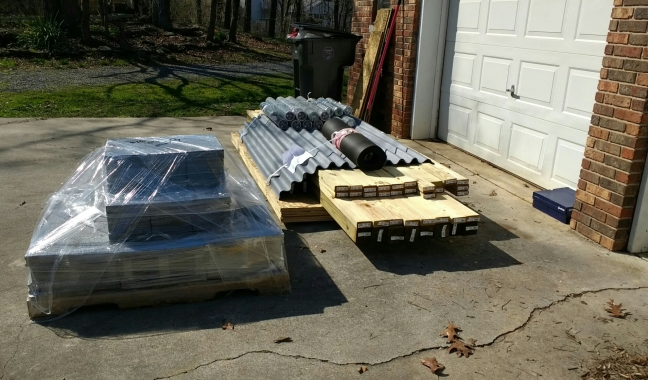 Ugh. Lumber is expensive. I know there are ways to get it cheap or scavenged. But I didn’t do that.

In fact, we’ve spent a stupid amount of money on this daggone chicken coop and run. But ya know what? I would rather it be done the right way with quality materials and only have to build it once and it last a good long while than throw up some kind of makeshift project (which always ends up happening to me) and having to redo or rebuild constantly. I didn’t want a fixer upper coop. I wanted a quality coop that keeps my flock safe, secure, and happy. So, we splurged a bit.

We purchased at Lowe’s because we’ve yet to be disappointed with their selection and we appreciate their 10% military veterans discount. Also, they’re the closest to our house and they deliver materials that won’t fit in the back of our Subaru.

If there’s one thing I learned from my years of set construction in the theater, it’s that you always want to make sure you have slightly more than you think you need to accommodate the inevitable mistakes that happen in spite of the “measure twice, cut once” ethic.

I went with pressure treated wood. I know some people argue against that with chickens because if they peck at or ingest some of it, harmful chemicals, blah blah blah. There’s support for that argument. However, my climate is technically a rainforest based on our annual inches of precipitation so I was concerned with getting lumber that will endure lots of water.

Instead of siding it, we just decided to use some exterior paint. And I decided on purple. Why purple? Excellent question. It’s not my favorite color by any means. But, it is exactly between cool and warm colors on the color spectrum and is complimentary in any season. (I learned that from University of Tennessee’s kitchen garden)

See? Doesn’t that purple look nice against the various colors of plant foliage and blooms?

Total cost of all the coop and run materials was $1,147.63, not including paint, run fence panels, hinges, or latches. It’s still a little less than some of the custom built ones we could have ordered, and more expensive than some others. But, as I said, we wanted quality materials and our own design that was exactly the dimensions we wanted.

We had to get a few tools we didn’t have, like a circular saw and chalk line, so that added to our total expenditure.

Now we just have to actually put it together.