Time for a little update on our Back to Eden style garden(s). The veggie patch is doing pretty well. Of the plants we started from seed directly sown, we have knee high Ogegon sugar snap peas, and strike and royal burgundy bush beans, early Scarlet globe radishes, a couple turnips, romaine lettuce, Viking spinach, dwarf Scotch curly blue kale interplanted with sage and dill, and Imperator 58 carrots. Some of those seeds are MIGardener seeds, some we’re Heirloom Seeds, some were heirlooms that my father-in-law and I had saved over the last few years. It all looks great, but I’m realizing that in order for it to actually be useful, I’m going to have to plant much more than I did this year. If nothing else, I can use this year’s crop for seeds and save them for next spring.

I also planted my Egyptian walking onions and the seedlings we started indoors which were coral bell peppers, Big Jim peppers, cayenne red peppers (which I had saved seeds from last year) and our tomatoes, cherry, mountain princess, an heirloom, and an Amish paste. I also planted purple broccoli, and snowball cauliflower seedlings, both of which seem to be doing alright.

Our back to Eden style strawberry bed is also doing well. We planted borage on the north side, and strawberries where they can receive the southern sun. All is well there.


The terrace garden will also be the back to Eden style, so we got the first tier leveled and wood chipped. 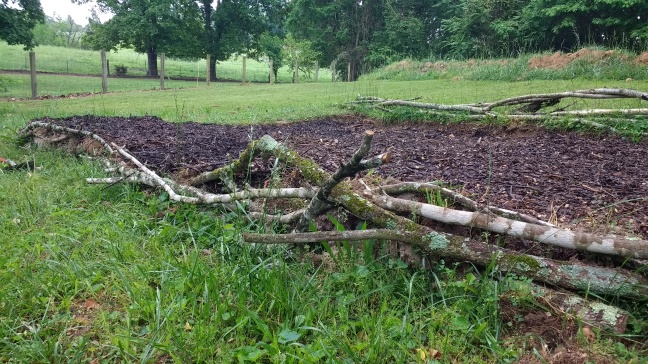 We’ll move down to the next tier probably this weekend, assuming my finger swelling decreases enough for me to grip a spade.

We’re working with what we’ve been given, learning as we go, and hoping to bless others with the fruits of our labor.