Well I finally got a look at the little booger this morning. 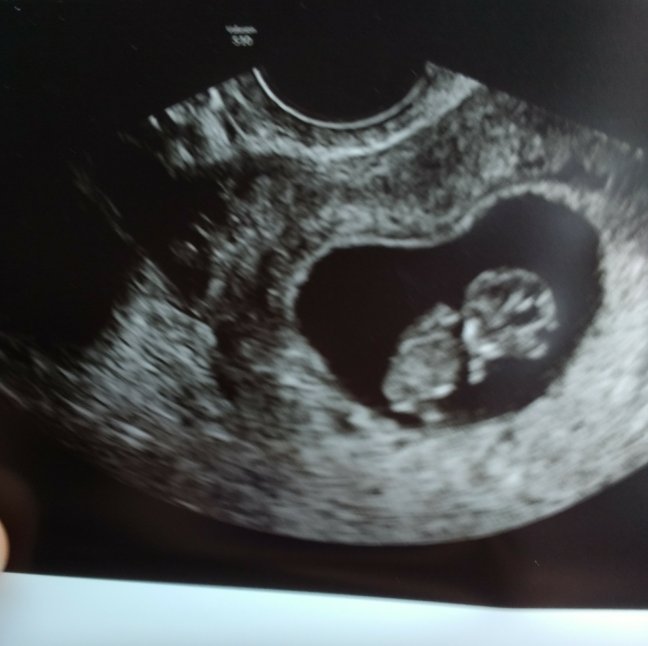 Waiting for the ultrasound was a fate worse than death- urine sample needed but I don’t have to go, and pap smear, while listening to modern country music… just shoot me. But, it was encouraging to be surrounded by reminders of Who ultimately runs this show.

And my due date got moved back to what I was initially thinking, January 2020. Frankly, if I can avoid labor on Christmas, I’ll be happy.

That’s something that I had hoped to avoid all together- keeping birthdays off major holidays. I always felt sad for kids with Christmas birthdays… Happy birthday, you’re less important than Jesus!

Don’t get me wrong, I’ll always celebrate a birthday…I’m not a Jehovah’s witness. Bring on the birthday cake. But that season gets so busy and congested it’s hard to fit everything in.

It’ll be okay though.

Everything looked healthy today, and aside from all food being absolutely yucky, I’m feeling better!

I’ve never had so much food aversion in pregnancy before so I’m kinda struggling to feed myself and wondering what’s up with this kid!?!? I make it about 1/4 way through a meal only to be completely revulsed by it.

Last night, I made some rice with parmesan and garlic, more because I thought it would be prudent to eat something for baby’s sake. And surprisingly, it was delicious, and I was actually wanting seconds. So I asked my dear, sweet husband to refill my bowl… He added pepper. Why would he add pepper!? Because he’s a firm believer that black pepper makes everything better. Except he’s wrong. I gagged. That ruined it. So I settled for slightly still hungry, but not being nauseated instead of forcing the black pepper down and risking parmesan garlic vomit… Eew. There are very few things in this world I hate more than vomiting. I avoid it at all costs.

So to sum up this pregnancy so far, fatigue without sleep, simultaneous nausea and hunger, and oh yeah, my three other children who need me to be functional. Lots of freeplay, playing outside (when there isn’t torrential rainfall) and thanking God the first trimester is almost over…again…but for real this time…