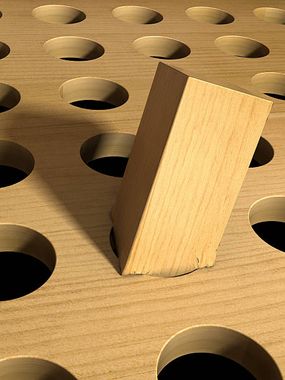 I keep hearing people use this expression as if it is a bad thing, referencing things that just don’t seem to work, are frustrating, or ill-suited to one’s needs or efforts.

Being the literary minded person I am, I’ve always enjoyed figures of speech and discovering their origins. I’m also a nerd for preserving the past and the wisdom that appears to be fading from our culture more rapidly with each passing day.

Therefore, I’ve taken it upon myself to clear up the whole “square peg in a round hole” conundrum for you all, if you’ll be so kind as to indulge me further.

My first encounter with this phrase was as a child visiting my grandparents’ house. My grandfather worked as a drafting teacher at a local community college.

He gravitated to Machinist which includes vertical and horizontal milling, lathe, grinding and cutoff saw, manufacturing processes, metallurgy, and robotics. He was fluent in the computer languages and programming of Bridgeport and Mazaac machines, and fabricated all sorts of nifty things that I remember from my childhood. He’s truly skilled in his crafts.

I remember him giggling as he showed my dad and me a “square peg in a round hole” that he had made. I asked him the other day if he still had it, and he confessed he didn’t even remember making it! I couldn’t quite figure out why he thought it so amusing at the time, but looking back now, I understand the irony.

But even that clever fabrication came at the concept from the viewpoint of ironic impossibility. It wasn’t until reading the Foxfire books with my kiddos this spring that I again encountered the expression as a literal and intentional piece of Appalachian wisdom from the Foxfire Books.

When building log cabins by hand, wooden pegs were often used in place of nails, as they were cheap, and easily made as compared to forged nails. Because of the nature of wood to expand and contract in different temperatures over time, builders would drill round holes in the wood using an augur and then drive tapered square pegs into the holes. Crazy, right? Ole ignorant mountain folks, right? Wrong.

What they knew but we have forgotten is that the corners of the peg, as the hole would expand and contract, would hold in place because of the tight fit. That way over time, their cabin would not fall apart as the pegs and holes expanded and contracted with the changing seasons, resulting in loose joints.

In essence, to drive a square peg in a round hole was to ensure the stability and longevity of the structure. It had nothing to do with stubbornness, ill-suited pursuits, or foolish ambition. It had everything to do with structural integrity and experiential wisdom.

But the Enemy is like that, is he not? He seeks to distort the wisdom from above, taking truth and making it a mockery. “Square pegs in round holes? What foolishness will you believe in next, resurrection from the dead!?”

It causes me to wonder what else the Enemy has distorted, and what lies we’ve unwittingly believed about our Good God and the world He created. If you’ve followed this blog for any period of time, you already know that one of the biggest lies perpetrated on the people of God, I believe, is the lie that it is difficult and complicated to grow food for yourself; that you need lots of land and machinery, and you have to till the earth, pull weeds, amend the soil, balance the pH, irrigate, etc. The Back to Eden method of gardening shatters all of those lies we’ve believed that make us slaves to the land, to manufacturers of machinery, to agricultural science, to consumerism, on and on and on. Sure, those things may have elements of truth. But we tend to overcomplicate things God intended to be simple.

And so, I’m taking back the expression “square peg in a round hole,” even if that means I have to offer explanation to those who hear me use it in it’s proper and original context. Because the truth is always true, and it merits our acceptance and affirmation. It may just open the door for witnessing to Christ.

2 thoughts on “Square Pegs in Round Holes”