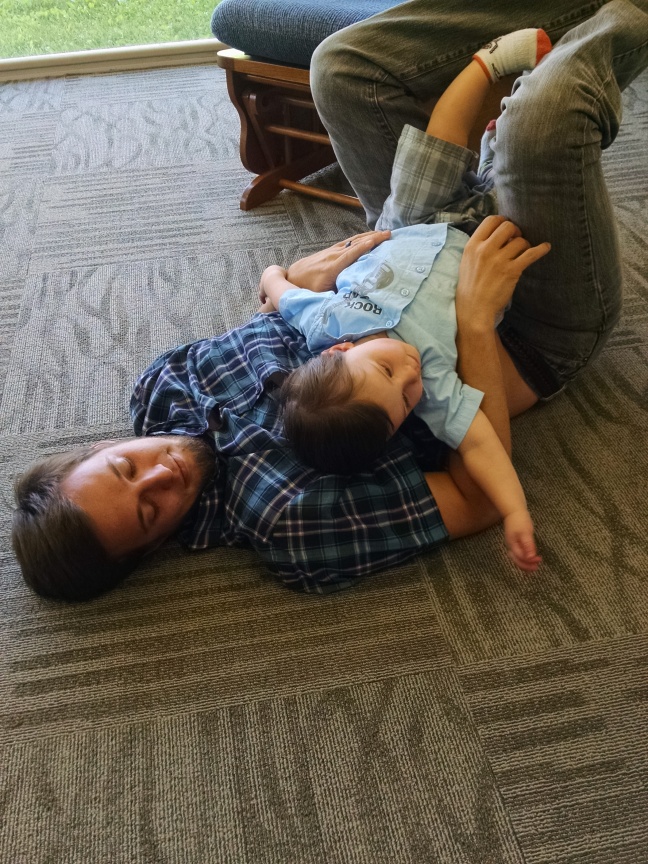 My husband and I were at the women’s clinic/ birthing center for an appointment to check on our expected little one arriving in December. My husband, one of my greatest heroes and my best friend, was there with me and our one-year-old son in spite of having come in his scrubs straight from working a 16 hour shift in the ICU at the vet clinic. He loves his family, and wanted to hear the heartbeat of Baby #2 and be supportive of me. Honorable dude, right? He’s one of the few and the proud. (USMC veteran)

While we were in the waiting area, I heard some people sitting in the chairs behind us discussing the possible outcomes of their 20 week anatomy ultrasounds. For those of you unfamiliar with pregnancy, it’s an exciting time because you can see that all the organs and bones and muscles are developing as they should, and if you choose to, you can learn the gender of the baby. I generally keep to myself in any sort of medical environment- peoples’ health is their own business, and I’d appreciate the same respect for my privacy- but these women (and some men they were talking to) said some things that elicited a visceral response in me.

I’ll paraphrase as the conversation went on for about an hour. They were talking about how upset they’d be if the ultrasound revealed that they were having boys. Why? Because boys are bad, and difficult, and disobedient, and boys grow up to be horribly misbehaved and misogynistic, and lazy and once they turn 25? Forget it! Useless! The world needs more women, because boys and men just suck.

It took everything I had not to vomit, punch them in the throats, tear them apart with a shrewd rhetoric, and then  drop a microphone and walk out the doors… Fortunately, my parents, whatever their other faults, had the good sense to teach me that if I couldn’t say anything nice, I should just keep my mouth shut.

Really? we have to indoctrinate hatred of men from the womb? Why? In what way does the vilification of men serve women? Might I add that all these women here were pregnant, by natural means, meaning they had to at least have slept with one man… Ironic?

As a Christian, I believe that all human life is intrinsically valuable. ALL human life. Christians, atheists, Buddhists, Hindus, Muslims, Men, Women, Children, all of them are equally valuable because they have all been created in the image of God; we all bear the image of the Creator- an eternal soul that lives beyond death.

I realize not everyone shares my faith or religious convictions, so let’s go so far as to look at this from a non-theistic perspective for a moment.

According to the United States Census Bureau, in 2010 women outnumbered men 50.9% to 49.1%. So right off the bat, we see that the United States at least do not “need more women,” if anything, there are not enough men to go around. But I guess if we continue to spread this third wave feminist egalitarianism propaganda, it won’t matter anyway because none of them will be looking for dependable, faithful, honorable men with whom they wish to marry and start families.

Moving on to college campuses! Again, pulling data from 2010, college applicants were comprised of predominantly women at 56% as opposed to their male counterparts who made up 44% of applicants.

Which begs the questions, if more women are attending universities than men to obtain higher educational degrees, 1) How can women continue to decry the educational system as being bigoted and sexist? 2) Assumedly women are then pursuing careers in their chosen fields of study so why do we keep hearing about more women needing to enter the workforce and then complaints about a wage gap that doesn’t exist for the reasons they think it does? (studies have shown that the only wage gap that exists is so because statistically, women work fewer hours than men and typically gravitate to lower paying fields; think early childhood education vs. law enforcement.)

So even discounting the sheer numbers of women outnumbering men in our own nation in multiple capacities, lets look at the effects of single parent households on children.

The child’s world is a dependent one, closely connected to parents who are favored companions, heavily reliant on parental care, with family the major locus of one’s social life. The adolescent world is a more independent one, more separated and distant from parents, more self-sufficient, where friends have become favored companions, and where the major locus of one’s social life now extends outside of family into a larger world of life experience.

For the young child, divorce shakes trust in dependency on parents who now behave in an extremely undependable way. They surgically divide the family unit into two different households between which the child must learn to transit back and forth, for a while creating unfamiliarity, instability, and insecurity, never being able to be with one parent without having to be apart from the other. –The Impact of Divorce on Young Children and Adolescents, Carl E. Pickhardt, Ph.D.

This means that if the child grows up in a home with a single mother, the likelihood that his or her view of men will be negative is higher than that of a child who grows up in a household with both parents present and engaged in their upbringing.

That is true in all children of divorce, or otherwise broken families, regardless of which parent has custody. In children who grow up without a strong male or father figure in their lives, we learn that while genetics and IQ play a role in the development of a child, there are crucial developmental years during which the child is shaped by his or her caregivers and environment.

…This rapid growth in understanding- correlated with a rapidly growing brain- emerges in early childhood as two powerful motives. These are, first, to “fit in,” to be liked, appreciated and accepted. The second motive force is a drive to become competent, to replicate the routine behaviors enacted by those who’re older and more capable. The presence of these drives accounts for the child’s ability to learn through observation, imitation, and, by extension, playing with objects and ideas in make-believe… Children learn in particular contexts that are conveniently structured to facilitate such learning. The very family members assigned to care for toddlers… are also playmates and role models….- p. 18, The Anthropology of Childhood: Cherubs, Chattel, Changelings, 2nd Edition, by David F. Lancy

In this we see that children grow up to emulate the things that they see in their caregivers, whether that be mom and dad in a traditional family, single mom, single dad, divorced parents, grandparents, or other such care givers. By subjecting young boys early on to the notion that they are somehow lesser or inferior to females (by comparing them to sisters, female peers, etc.) we are engraining in generations of men a defeatist sense of determinism: I can’t go to college, because I’m not smart like my sister; I can’t find a good woman to love me and raise a family with me because I’m not good enough and I’m just like my father; I can’t pursue my interests because they’re steeped in antiquated patriarchal gender roles and that makes me a sexist misogynist, etc.

We’re raising a culture of beta males easily defeated and devoid of a sense of purpose or value. We’re raising females who use emotional manipulation to get what they want in the name of female empowerment instead of actually empowering themselves by pursuing physical strength, mental acuity, or spiritual stability. To quote Stefan Moleneaux, “We have this victorian era, pearl-clutching, fainting couch, smelling salts mentality” which says women are superior, because reasons! without ever offering empirical evidence to support such an absurd claim, and ignoring the reality that men as a whole have built the vast majority of western civilization and fought and died for the freedoms that granted these same women the rights to whine and moan about how mistreated they are. Women long for equal treatment and in the same breath decry men for their lack of chivalry. Which is it ladies? Do men suck? Or should they hold the door open for you out of respect? Because with the present climate of culture, I’d just as soon let the door hit you on your way out with the way you disrespect men as a whole.

I get it. There are plenty of people who have had crappy dads, uncles, boyfriends, brothers, husbands, whatever… I, personally, went about 3 years without even speaking to my father, so I get it! But the fact is, you can’t judge the entire male gender by its abuses.

My son shouldn’t feel inept or inferior to your daughter simply because he was born with a Y chromosome. We unapologetically applaud and celebrate his masculinity here at home because that is part of what makes him who he is. The God of the universe, the God who set the stars in their patterns in the sky and fixed the orbits of the planetary systems saw fit to create mankind in his own image; Male and female He created them. (Genesis 1:27) We’re supposed to be complimentary. Equality of value doesn’t mean equality of role or function. Men and women are biologically, fundamentally different, for a purpose- GOD’S purpose. And even if you don’t agree with me on the point of religion, I’m sure you can see how negatively impactful it would be to my son to grow up hearing that he’ll never live up to society’s expectations because he’s too loud, rambunctious, playful, energetic, aggressive, curious, fidgety, or dare I say it, masculine.

And women, it’s time we take responsibility for our children and our relationships. Perhaps if your son turned out lazy, and rebellious, it’s because you failed him somehow as a parent? Perhaps if your husband left you, it’s because you made a poor choice in mate? Perhaps if your daughters are different than your sons, it’s because there are genetic, biological factors at play, in addition to your own favoritism and experiential bias? Perhaps if we want men who treat women with dignity and respect, we should demand no less of them as children? And perhaps if we want men who value us as treasured sisters in Christ, we need to teach them that ALL people are of intrinsic worth because of Him who died to save us?

I pledge to raise upstanding young boys who grow up to be respectful and chivalrous young men. If your daughters can’t handle that, they don’t deserve my sons.