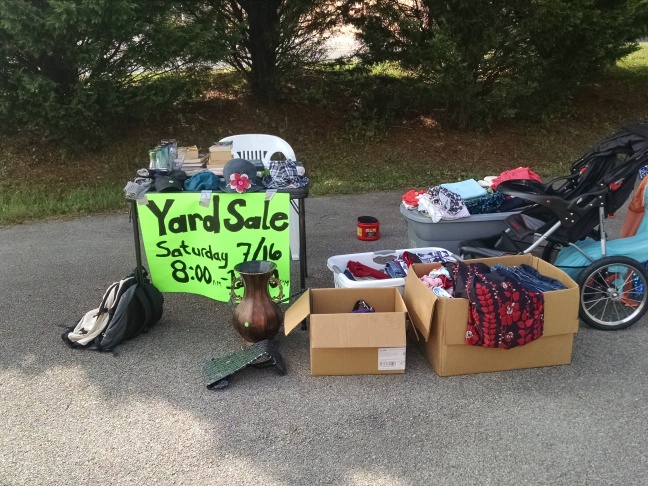 Is there anything in the world more awkward than piling the crap you don’t want in your driveway and hoping someone decides your crap is worth buying? Yes, and that’s when they browse through your crap and decide it’s NOT worth buying. “Sorry, dude, all your possessions are worthless junk”

My hoarder of a husband, while the hoarding nature has been watered down through the generations since his grandfather, is still unreasonably clingy to certain things… and I’m able to say that because it’s his stuff and not mine. Seriously though, PC games? We own a MAC!

I learned something about myself though in preparing for this yard sale; I have a LOT of things. For a lot of people, myself included, I don’t think we start out with the intent to be materialistic. 6 years of marriage and one and a half kids (come on, December!) Just kinda makes you that way. Americans have a uniquely American way of accumulating a lot of stuff. Not even family heirlooms! Most of my stuff consists of clothes I haven’t worn in two years, incomplete decks of cards, guitar picks, worn out paperback books, wallets and purses, (I went through a phase) sheet music, and other miscellaneous items that have no real value. If I thought anyone would pay money for the tenor sax reeds I have no sax for or the jazz tuba mouthpiece I used in high school marching band, I’d feel a little better about displaying my stuff on the front lawn. As it were, I’m a tall and awkward size, with gigantic feet so good luck selling to an average sized woman of 5’5″, shoe size 6…

In trying to get back to a simpler lifestyle, I’ve been hit hard with the materialism that seemed to creep up on me. Why do I need 2 saxophones, 2 guitars, 2 bass guitars, and a piano? I mean, hopefully for the family band I’ll have in another 5 or so years… seriously though… it’s time to part ways with a lot of the crap I’ve been holding on to.

Life is like that… we go along holding on to a bunch of crap that is useless, weighing us down, keeping us from living free; keeping us from focusing on and serving God. And I don’t want to live like that anymore – tethered to things and stuff that don’t mean anything.

So, if nothing else sells (I’ve made a whopping 50¢) I’m donating it (or throwing it away in the case of incomplete decks of cards) because someone may need or be able to use it, but I certainly don’t need to pack it all up and move it again so it can sit in boxes in storage.

I’m getting rid of the junk. Literally, and figuratively.