I did that thing I do…again… Where I have an idea of what I want to do, but there aren’t any pre-specified instructions for it because no sane person has ever attempted it before.

By golly, I may not be sane, but I am frugal, dangit!

I had about 40 cherry tomatoes the size of ping-pong balls that we were never going to eat before they spoiled… So I decided to can them.

The first thing my father-in-law said was, “It’s gonna be a chore to peel all those boogers.”

To which I laughed derisively and said, “Peel them? I wasn’t going to bother peeling them! I’m just gonna quarter ’em and call it good!”

The reason I’ve found most people use Romas instead of cherry tomatoes in canning is that 1) they’re larger and have more flesh than seed, and 2) they roast and peel them so that the skins don’t separate from the tomato flesh in the jars.

In my case, cherry tomatoes are too small to warrant the painstaking effort it would require to peel them. And also, I would have just used them in a soup or chili fresh, and the skins would have separated in the chili or soup during cooking, so what do I care if it happens in the jar during processing? Not only that but I don’t HAVE Roma tomatoes, I have cherry tomatoes. And further still, there are valuable phytochemicals contained within the skins of the tomatoes, so why would I want to get rid of those? (Though, truthfully some are lost in the cooking process) See the insanity of people doing things the way they’ve always done them? For the sake of asthetics?

So I did it. I made some homemade Rotel-style canned cherry tomatoes. 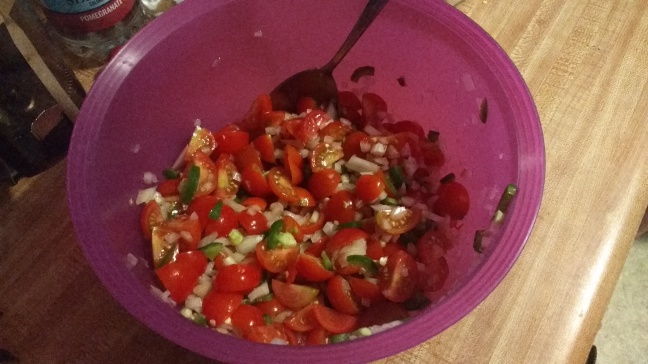 I guestimated on the number of tomatoes to peppers and onion ratio. But here’s a rough recipe:

I chopped everything up, mixed it in a bowl, and packed into half pint jars leaving 1/2″ head space. I processed for 35 minutes in my boiling water canner, and let cool.

This is the finished product:

I suppose to each his own and maybe you all think I’m nuts or ignorant, but I fully believe in using what you have available and the thought of wasting all those tomatoes that I spent the time and effort to propagate for months in my laundry room and then spending time pruning and trellising… Well, I didn’t want that effort to be for naught.

Am I crazy? Frugal? Ignoramous? A crazy frugal ignoramous? I’ll let you decide.