Sometimes I think politics itself and our political system is a tragedy in and of itself.

In his farewell address, President George Washington warned against the dangers of bipartisan politics, a disregard for our nationality as Americans, “by birth or by choice,” and misrepresentations leveraged by politicians to push an agenda. Sounds familiar, right?

In all honesty, I could quote the entirety of his address because it’s that good. It’s. That. Good. You can read it in its entirety here

But the part that really hit me this evening was this: 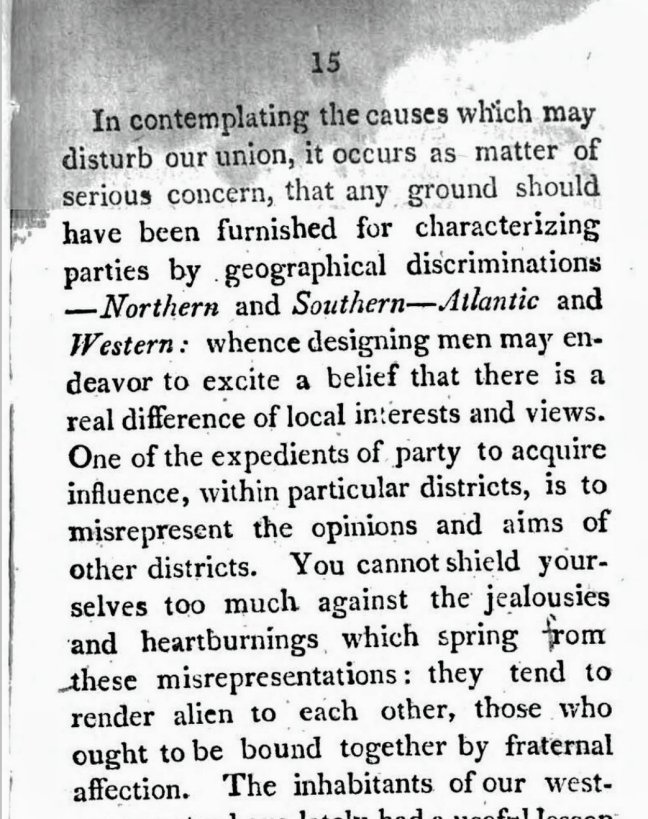 “In contemplating causes which may disturb our union, it occurs as a matter of serious concern, that any ground should have been furnished for characterizing parties by geographical discriminations . . . Whence designing men may endeavor to excite a belief that there is a real difference of local interests and views.”

Even then, in the year 1812, this POTUS foresaw some of the biggest divisions as the detriment of our country.

He posited that there would be politicians with personal agendas who would appeal to perceived differences based on geography (or culture, or race, or ethnicity, or… Whatever) and use them to exploit the American people for political power and monetary gain… Again, sound familiar? I can’t imagine any politician or political party member, for example, leveraging a tragedy like a mass shooting as a platform for political gain or agenda-pushing… Oh, wait…

Washington points out that our unity as a nation then came from shared beliefs, shared goals, shared virtues, and shared nationality. Yes, demographics have shifted in our society today. But y’all- we’re still Americans. And those of us who are Christian Americans, our primary allegiance is to God. Guys, this starts with Believers. Let me put this in perspective for us.

We gotta love our brothers and sisters in Christ. Guess what? Some of y’all gonna be surprised to be seated by a Democrat at the Marriage Supper of the Lamb… Yep, there are Dems who love Jesus. Because that’s the power of our Christ- every nation, race, tongue, and creed will be represented in His gloriously diverse and unified Kingdom, with Himself as the unifying entity.

It pains me- PAINS ME- to see people, not in jest, but seriously condemning political sides, parties, philosophies, and even entire generations (millenials and boomers, most often) for ruining our country. Our enemy isn’t Democrats. Or Liberals. Or antifa. Or Islamic extremists. It’s the Devil. And this generational division comes straight from him; the father of lies.

Sure I give millenials a hard time- I am one. There’s a degree of self-deprication and comedic effect in that. But if we want to dig into generational divides, guess who raised millennials? Yep. Looking at you, GenX… Who was raised by? Anyone? Boomers. Guess where the majority of complaints come from that I hear?

From my parents’ generation- GenX. They disdain their Boomer parents’ politics, they’re annoyed by their childrens’ activism, but somehow, they bear no responsibility in our current state of affairs. That has less to do with my overall point of unity, but I think it is worth noting.

What’s even more painful to see is Christians jumping on the defensive bandwagon of political rivalry and division every time we face a national tragedy. If I can perceive your die-hard Republican allegiance before o can discern your love for Christ and his Bride, the Church, I see a problem in that. I don’t care which side you’re on- the loss of life, especially a mass loss of life, is not the time or place to politicize a situation. You know what it is the time for? Grieving with the families who’ve been torn apart by murder. It’s not the time for new legislation that cannot fix the hearts and minds of the perpetrators of these crimes. It is the time for Christians to look to Christ. “Why?” Is the wrong question; it’s easily answered- our world is broken by sin.

The question is “When?” When are Christians going to minister to these hurting people? When are we going to start by loving each other instead of feeding into the “right is good, left is bad” philosophy perpetuated by career politicians and mainstream media? …When will Christ come back to fix this mess of evil and injustice?

When will we place our focus and passion into serving Christ and living as He did, and preaching His Gospel ahead of blaming “the other side” for inciting violence when the responsibility lies with the criminal?

You wanna know who’s responsible for the crime? The ones who commit them. You know who’s complicit? Any Christian who doesn’t take the time to share the love and grace of Christ to a lost and hurting world. Especially in times of tragedy.

And to that, all I have to say is,