I’m dragging out my soap box, so, you’ve been warned.

I’ve really struggled to effectively communicate with people for the duration of… Well, my whole life. But especially since this asinine masked-ness began.

Face-to-face speech is my preferred method of communication, where I can see, hear, and understand people. Even then- I struggle to hear what people say if I can’t read their lips and see their eyes for cues. My husband HATES this, because 1) he has tinitus and feels like he’s shouting over his ringing ears anyway. 2) it’s not true and if I can’t see his lips, he may as well be mumbling in a foreign language. 3) he hates repeating himself.

I also find that my tone is often misunderstood because

3) society is far too easily offended by the truth,

4) generally speaking, mercy is NOT high on my list of spiritual gifts (exhortation and teaching/shepharding are my highest- which is probably why I have an easy and successful time homeschooling) so speaking truth WITH GENTLENESS AND LOVE is hard for me and requires extra thought and effort, especially if the communication is not face-to-face.

Furthermore, everyone in my family still uses various forms of social media, which I don’t touch because of my tendency toward dopamine addiction from the social media “feel-goods”. So I lose out on communication with people that way.

So that leaves me with phone calls- which I hate because they lack facial cues. Or, snail mail to share news, which is irrelevant from the moment it’s posted. Or, face-to-masked-face.

I hate masks. Their whole premise is stupid. I say that out of a place from having read medical research, (not solely paid for/published by the CDC or WHO) not mere opinion. If that offends you, go ahead and consider it my opinion. You’re welcome to your own. But I shan’t debate them here.

But so that you can guage my meaning, how much can we lose from not having facial cues in conversation?

Notice the eyes alone don’t change much from smile to frown. I can no longer effectively communicate with people when I cannot understand their muffled words through a mask (which is precisely why I dislike talking to both doctors and dentists) nor can I read their facial cues. How in the world are people supposed to function in a society so steeped in idiom and sarcasm!?

When I look at a masked person- I don’t see a person. That is not to say that I don’t know there is a living breathing human being under that mask who is made in God’s image. What I mean is, I cannot see the things which I associate with personhood and uniqueness of identity, that is to say, one’s face.- all y’all masked folks look the same to me.

I am not the only one who experiences this break down in communication.

Studies have shown that infants recognize faces before anything else. My own experience with my 15 month old has proven that. She screams and clings to me when she sees someone wearing a mask reach toward her. If and when they remove their mask, she calms down when she recognizes the person. Every time, without fail.

Now, I realize some people are more auditory people, but my primary mode of learning, and taking in the world around me is visual/kinesthetic. And to cover one’s face is to deprive people like me of the ability to effectively communicate with those around us.

I’ve noticed that large swaths of society have just turned into phone-addicted, robotic, sheep that uses GIFs and emojis to communicate with people. I’m not wholly there…yet. And won’t be, God willing.

Has anyone looked at how this is going to impact our children? (Or other people’s children- my kids still get to see faces) to wander around our already self-obsessed culture of iPhone, ear buds, social media, being treated as if everyone around you has the plague, and living in the age of shut-out-the-world-of-reality-around-me-and-live-in-a-hermetically-sealed-bubble-telling-myself-I’m-acting-in-the-interest-of-others virtue signaling, what hope do our kids have of not succumbing to isolation, fear, emotional abandonment, social anxiety, etc!? Kids will hear the message, “Lay down your rights for those of others because you don’t matter to the collective, and do so in a vacuum because we’ve already stamped out Biblical Christianity from our cultural influence.”

He feared God the Father.

How many times have I heard, “Well if I don’t wear one to work, I’ll lose my job!”

I mean, maybe? Has that been explicitly stated? Have you actually asked and confirmed what course of action should be taken should you refuse? Do you realize that HIPAA law is legally allowed to be violated during a “pandemic”? Are you aware of your rights to begin with, let alone the ones being stripped from you? Or are you allowing fear to control and dictate your actions? Do you really want to work for someone who would strip you of your civil liberties or religious freedoms for the “greater good”? (I remember when people believed preserving civil liberties was the greater good) Who simultaneously preaches anonymity, conformity, uniformity, and moral relativism (your truth/my truth), which is based on individualism/humanism? It is logically insane! Do you worship your job security and idolize your paycheck? Do you doubt God’s ability to provide for you should it come down to compromising your beliefs or keeping your job?

God has really been stripping away my fear of man, so forgive me if everything looks like a nail right now, I’ve been handed a very large hammer.

“The one who fears God will fear nothing else.” -Edward T. Welch, When People are Big and God is Small

Wear a mask if you want to. Maybe you even have medical reasons for it. Fine, I’m not judging you. That’s your perogative. Do your research, draw your own conclusions. Extend the same courtesy to me, because I have done the mask research. And neither hell nor high water will make me wear one, and all will have the privilege of knowing exactly whether or not I’m smiling as I walk past, and may even hear an un-muffled greeting, combined with a friendly wave. Because I don’t fear sickness. I refuse to. Because I know my God. And He has conquered all fear. 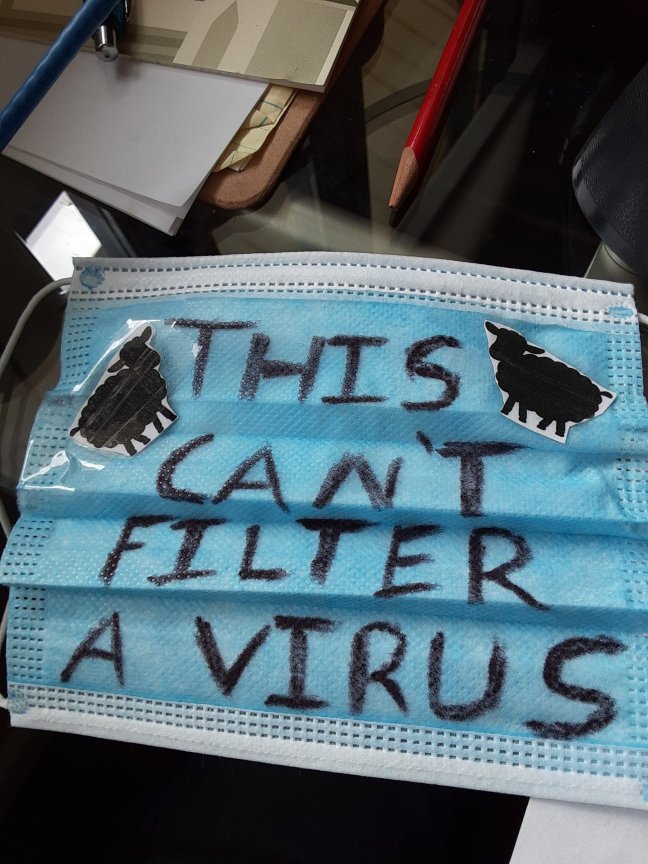 2 thoughts on “Communication Struggle and Fear”