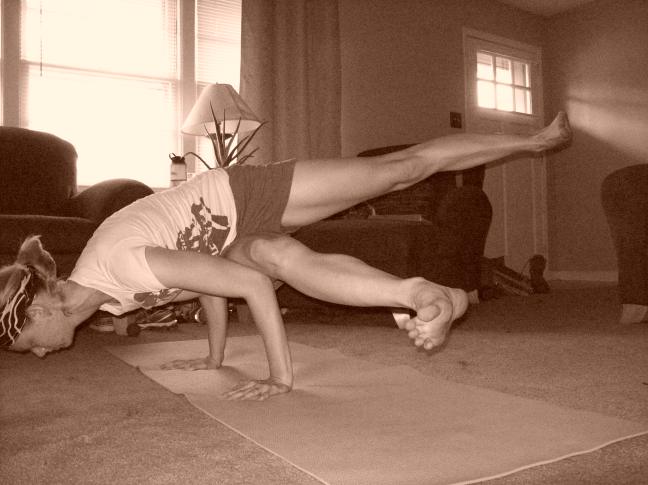 With some help from my husband, I eventually recognized that my lifestyle was not super healthy and I knew I was not feeling my best. I made a commitment to get fit while my husband was deployed.

I had always enjoyed running so I set a goal for myself to run a ½ marathon. I picked up a Runner’s World, flipped through the race guide in the back, and picked a Rock N Roll ½ near me in approximately 6 months. With that goal in mind, I had some accountability in reaching my fitness goal. At the most, I logged 25 mile weeks and I did several 5k and 10k races in preparation for the ½. And putting in all that time pounding the pavement lead to some serious (and much needed) weight loss- Finally! I shed the freshman 30 I put on 3 years prior.

I also kicked up my weight training a notch…by actually doing it. I maxed legs at 170lbs in squat, maxed arms at 100lbs bench, and tightened and strengthened my core by maintaining a home yoga practice. At that time, I weighed 125lbs soaking wet, and at 5 feet 8.5 inches, that was technically underweight by the BMI scale. BUT, I felt fantastic! And for the first time in a long time, I felt like I LOOKED fantastic as well.

In response to my formerly atrocious diet, I dialed back the portions and backed off the carbs and starches. I was eating green things that weren’t M&Ms! More protein and veggies had me feeling pretty good about my diet too. Finding a job as a teacher assistant actually helped my healthy eating endeavors even more by forcing me to take my lunch with me and eat smaller controlled portions at designated times throughout the day.

My medications stayed about the same, with added pains in my knees and hips from running so frequently and for extended distances and I developed Exercise Induced Asthma, for which I was prescribed a Ventolin Inhaler (Albuterol) which eventually became the only way I could make it through an entire 10 mile run in the Eastern North Carolinian humidity. And I came off the birth control pill and my cycles actually acted with some predictability for the first time in my life! Hooray!

Spiritually, I was in a very interesting place. I was reading my Bible daily and spending time in prayer and growing a lot closer to God by prioritizing my faith and discipleship. I thought I was doing everything right! I was getting in shape, I was losing weight, and I was feeling so much better … for a while.